Polish American Actors Theater (PAAT) is a professional live theater based in Chicago, Illinois. It was founded by Mariusz Krzysztof Kotowski in January 2019. The theater’s mission is to promote Polish culture in the U.S. through theatrical and musical performances.

Polish American Actors Theater brings together an international cast of artists performing in Polish and in English. Through its diverse and carefully curated selection of classic, contemporary, and musical plays, PAAT aims to introduce the audience to the works of Polish and American playwrights that ignite imagination and inspire an experience of a deeper connection with art. 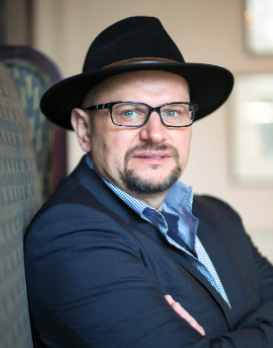 Mariusz Krzysztof Kotowski is an award-winning writer and director. Born in Poland, he received his Masters of Education there. After studying dance and choreography in Poland and England, Kotowski moved to America. He worked with numerous actors and dancers as a choreographer in New York, and studied film directing at NYU. Kotowski’s first film was a documentary, Pola Negri: Life is a Dream in Cinema. It included interviews with Academy Award-winning stars Hayley Mills and Eli Wallach. The film premiered to sold-out audiences in 2006 in Los Angeles and again at the Museum of Modern Art (MoMA) in New York. In 2010, the movie’s European premiere was held in Paris Paris at Cinémathèque Française.

Kotowski next focused on writing and directing independent feature films. In 2009, the feature length drama, Esther’s Diary, was released followed by the psycho-thriller film Deeper and Deeper in 2010. Both movies have been screened at numerous festivals all over the world and have won notable acclaims. In 2012, Kotowski took on the role of the executive producer for the release of a DVD Box Set of four rare silent films entitled Pola Negri: The Iconic Collection “The Early Years”. The boxed set received excellent reviews in the Los Angeles Times and other publications.

Kotowski is also the author of the biography Pola Negri: Legenda Hollywood. Published in Poland in 2011, the book was recognized as “Book of The Year” in Books Literary Magazine. Kotowski’s second book, Pola Negri: In Her Own Words also was published in Poland in 2014. Pola Negri: Hollywood’s First Femme Fatale, published by the University Press of Kentucky, followed in the same year. In September 2014, he was invited to present his book at the Museum of Modern Art in New York City.

In 2016 Kotowski worked with Polish TV in Chicago to produce and direct the play Mężczyzna at the Chicago Dramatists Theater. He also worked with MB Stage Productions to produce Shadow of Doubt for the 2016 Hollywood Fringe Theater Festival. In 2017 Kotowski directed a documentary for Polish TV, Life of a Star, as well as directed and produced a documentary Road to Freedom. In 2019 Kotowski set up the Polish American Actors Theater in Chicago, where he acts as the founder and creative director. That same year, he was also awarded Special Recognition by the American Institute of Polish Culture, Inc. in Miami for his outstanding accomplishments in arts and education, and for advancing Polish culture in the U.S. Currently, Kotowski is working on several other stage plays, as well as movie projects, in the U.S. and Poland.

He and his wife Heidi split their time between Austin, Texas and Chicago, Illinois.