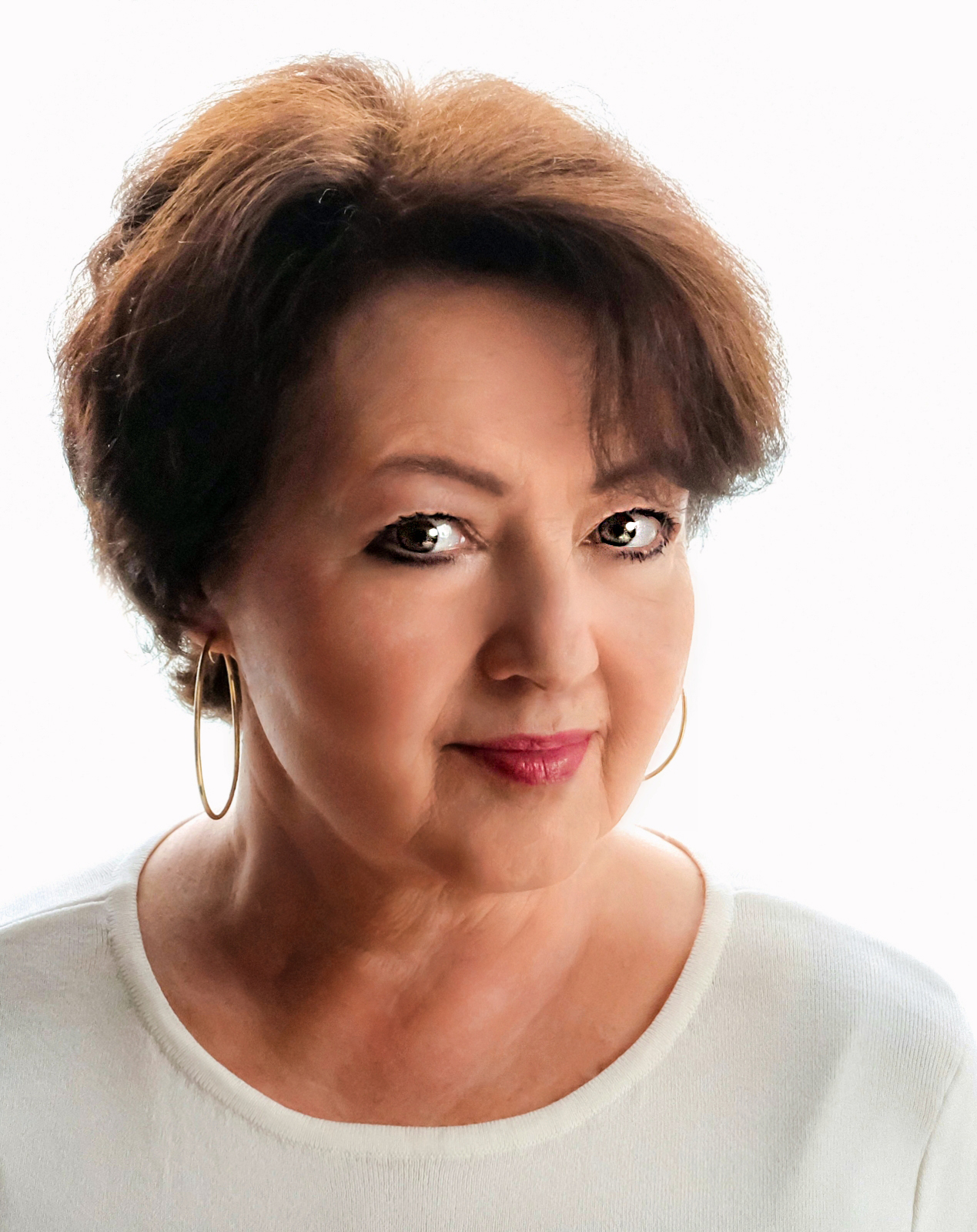 A native of Wrocław, Julitta Mroczkowska has lived in Chicago for many years, and worked with a number of Polish theaters and TV stations. An audience favorite, she is a multiple time winner of the best Polish actress in Chicago award.

Fascinated by theater and movies from an early age, Mroczkowska won a number of national poetry recitation contests in Poland, and worked with student theaters – Ad Hoc and Kalambur. She remained active on stage while studying law at the University of Wrocław.

With an acting diploma from the State Academy of Drama in Warsaw, she moved to the US where she immediately got actively involved in the theater life of the Polish community in Chicago. She joined the team of Ref-Ren Theater, and toured with them around the US and Canada. Taking on leading roles in Ref-Ren’s productions of vaudevilles and plays, she also gave several guest performances in London.

Mroczkowska’s artistic achievements include roles in a number of stage plays performed in Chicago theaters and directed by Wanda Zbierzowska and Lidia Pucińska (Mazepa, Chata za wsią, Tango, Kwatera nad Adriatykiem, Dwaj mężowie pani Marty, Fiddler on the Roof, My Fair Lady, Sound of Music and many others), as well as appearances in Bocian Cabaret performances, and the Cabaret’s production of Summer at Nohant.

Involved with Scena Polonia for many years, she starred in fairy tales (The Snow Queen, Pinocchio, Pippi Longstocking) and plays: Wesele and Mężczyzna idealny. She also appeared in a number of plays presented by Teatr przy Stoliku run by Alicja Szymankiewicz. She is also actively involved in poetry evenings organized by Elżbieta Kochanowska.

Mroczkowska has also appeared in a TV mini series Bobby and Iza, in an episode of Polsat’s series Pasjonat, and in a short film 7 Scenes from Home. 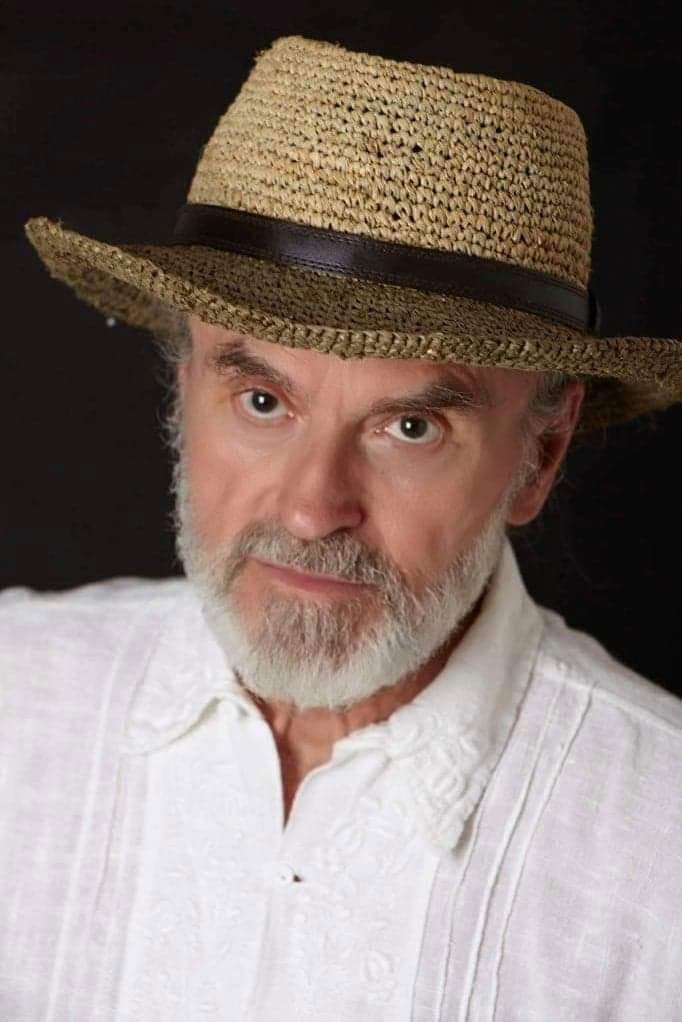 Maciej Góraj, born on March 11, 1950 in Łódź, is a Polish film, theater and television actor who, in the 70s, was considered one of the most promising actors of the young generation.

After high school, he began studying acting at the State Film School in Łódź, from which he graduated in 1972.

In 1972–1973 he performed at the Polish National Theater. In the years 1973–1974 he played at the New Theater in Łódź. In the years 1974–1988 he was associated with the Universal Theater in Warsaw. He made his debut on the cinema screen as a minion in the historical film by Witold Lesiewicz Bolesław Śmiały (1971) with Ignacy Gogolewski (as King Bolesław II Śmiały). For the role of Zenek Stankiewicz, a crippled soldier of the Peasant Battalions, in the war drama of Sylwester Szyszka Dark River (1973) he was honored with the Award of Zbyszek Cybulski by the weekly "Ekran". In the psychological crime drama of Stanisław Lenartowicz I killed (1974) he played the character of the real killer.

In the late 1980s, he abandoned his successful career and emigrated to the United States. In 2016, after a long break, he returned to the big screen as the father of the main heroine in Smolensk. In the US he settled in Chicago where in 1992 he debuted in the role of Jan in the play "Panna Julia" by A. Strinberg directed by Z. Zasadny. Finally, in 1994, he played the role of a Polish jazzman in the movie "Trap" directed by A. Drabinski. Recently he played the role of Widmo (The Ghost) in Mickiewicz's Dziady directed by Kinga Modiejska. Maciej Góraj is also known for his performances at the Theater at the Table by Alicja Szymankiewicz.

On the radio, he played the role of grandfather in the play "Wigilia" authored and directed by Ewa Figurski. In 2019, he was awarded the "Pola Negri Lifetime Achievement Award" for his entire artistic work by the Polish American Actors Theater. 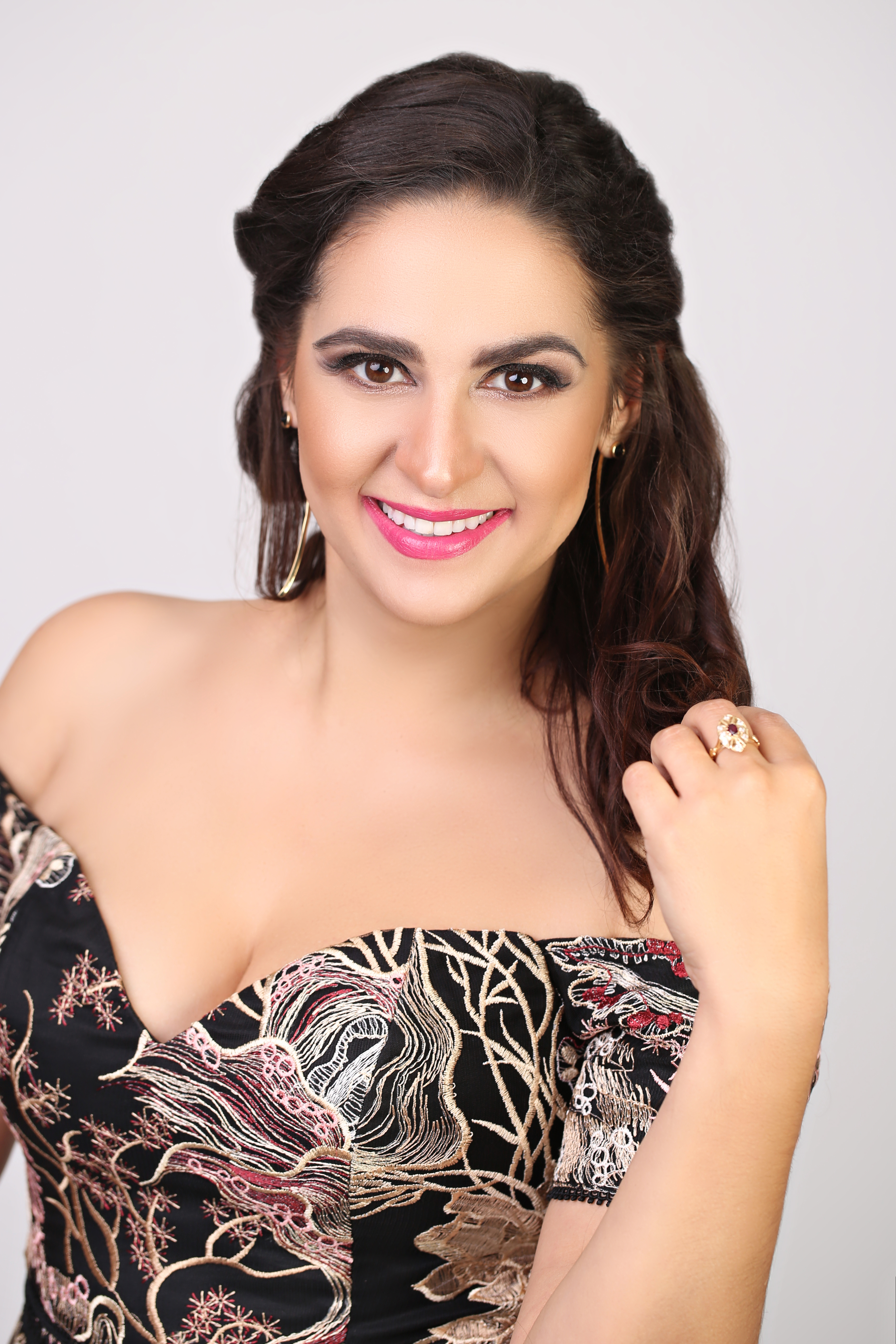 Lukrecja Wilk was born in Brzozów, a picturesque town in the Podkarpackie Voivodeship, Poland. She discovered her passion for the theater in elementary school by participating in and winning many poetry recitation competitions. Her big achievement was winning first place in the German-language prose and poetry competition Von Lessing bis Dürrenmatt.

In high school, she was associated with the TATA theater. She appeared in several plays at this theater, most notably the play Gulliver's Travels by Jonathan Swift in the adaptation and direction of Damian Kierk.

After graduating with her Master’s degree in psychology from the Jagiellonian University in Cracow, she moved to the USA. On American soil, her first step in her acting career was to perform in numerous performances at the Art Gallery Kafe in Wood Dale with the group Bez Rutyny. As part of this group, she passionately and gracefully declaimed poetry of Anna Radzikowska and Leszek Straszewski.

In 2019, she played the role of Stella on the stage of Hunters Restaurant in the farce of Danuta Drążkowska: Swatka.

Lukrecja continues to improve her artistic skills at the Acting School run by Mariusz Krzysztof Kotowski. Currently, she is associated with the Polish American Actors Theater in Chicago.

In her personal life, Lukrecja is passionate about cross-cultural psychology, psychodrama, foreign languages and diving. She lives in Wheeling with her husband Kamil Wilk, who supports her dreams and aspirations. 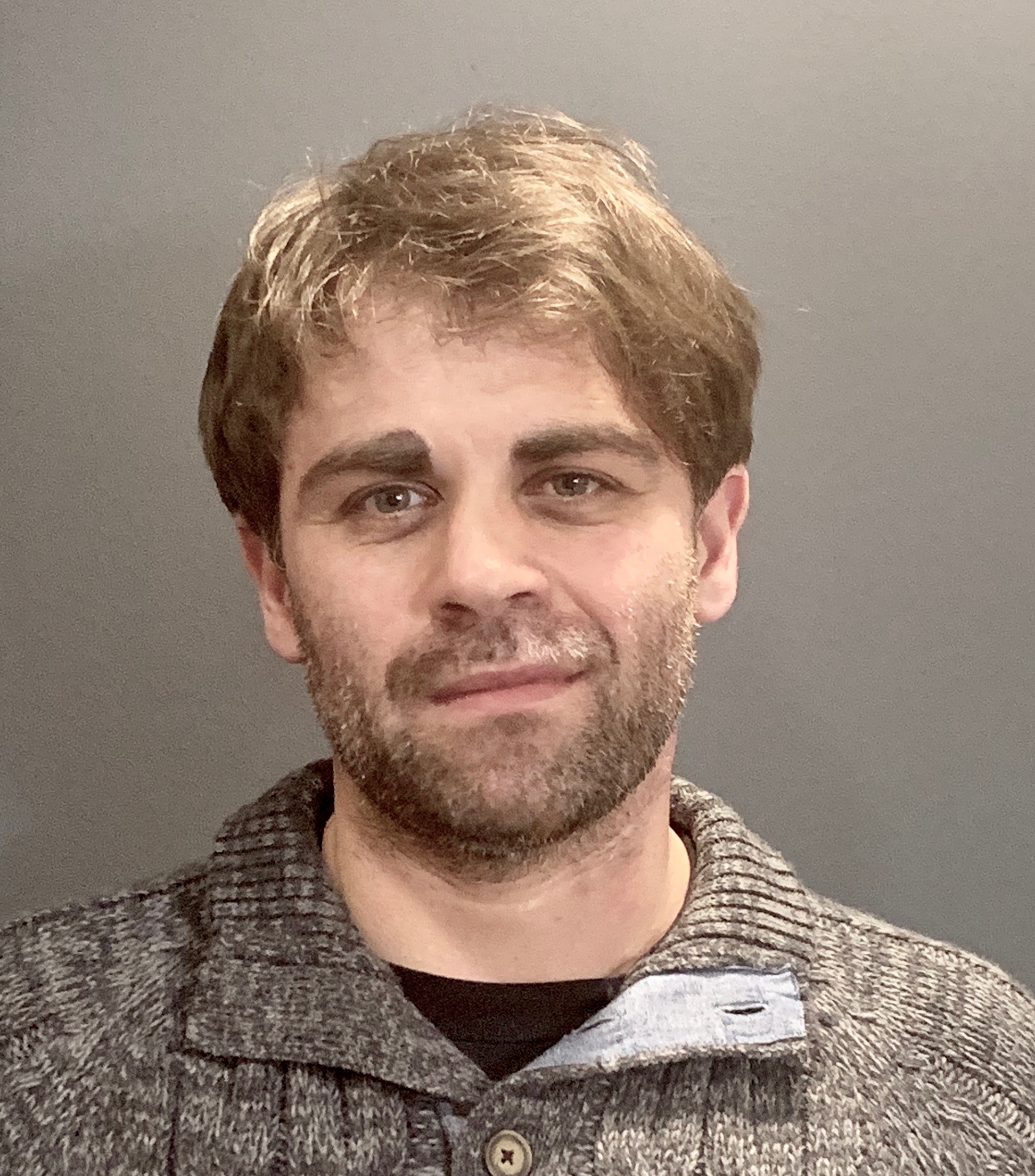 Born in Zaklików, Poland. thanks to his parents, he was involved with literature and arts from an early age. He currently lives in Chicago where he works as a stage project manager.

Associated with many Chicago scenes. He has appeared many times in the performances of the Scena Polonia Theater and Modjeska Theater Studio: "Alice in Wonderland", "Wedding", "Dziady" II part, "Bethlehem for the word", as well as in numerous performances for Polish schools. He was a member of "Kabaret Bez Rutyny", where he played the role of Little Red Riding Hood in the play of Anna Radzikowska "Why Little Red Riding Hood did not reach grandma's house", and as a messenger in "Puzderek".

From 2019, he was also associated with the Polish American Actors Theater, where he played the role of professor in Gabriela Zapolska's play "Their Four" directed by Mariusz Krzysztof Kotowski.

He also performed at the Polish Radio Theater in Chicago in the play by Ewa Uszpolewicz-Figurski "Wigilia".

Often, he used to present his own poems, as well as those of contemporary Chicago poets, accompanied by his own musical compositions in evenings of poetry. 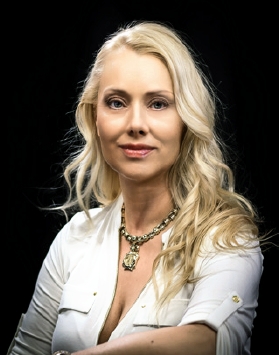 Anna Dolecki comes from Kraków, where she pursued her interest in theater from an early age. As a student, she was involved with Teatr 38. After graduation she left for the US, where she has lived ever since.

Having established a successful career in education and then in banking, she decided to return to the stage. She debuted as Julka in Gabriela Zapolska’s Mężczyzna directed by Mariusz Kotowski. The play was staged at the Dramatists Theater in July 2016, and was hugely successful. That performance revived Dolecki’s adventure with theater. Since then, she starred in The Snow Queen at Scena Polonia theater; she was the vixen in Pinocchio, and the angel-director in Betlejem dla Świata.

She also gets involved in a number of other artistic projects, including poetry evenings. In 2019 she played the sorcerer in Adam Mickiewicz’ Dziady at Scena Polonia theater. She considers her involvement in performing arts and her return to the stage as a great adventure, and a dream come true. 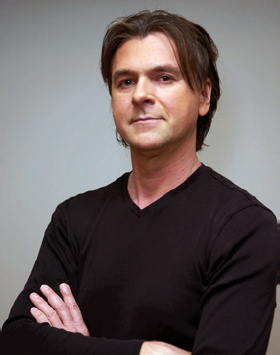 Grzegorz Chiliński is one of the few Chicago actors enjoying tremendous popularity among both children and adults. He was born in Olsztyn, Poland, and grew up in Ełk. While in Poland, he completed a 6-year music school. He arrived in the US in 2003. As an actor and musician, he has performed on stages of Polish theaters in the US for over a decade (in comedies - including Mężczyzna idealny by John von Düffel, as well as dramas - including Wesele by Wyspiański). He has appeared in recitals, musicals, poetry and cabaret evenings, as well as numerous performances for the younger audience. He takes on roles in plays for children and adults. His stage experience is substantial, as he plays at least 10 different characters every year.

In his personal life, his most important roles include being a father to his adult daughter Aleksandra, a stepfather to Nicole, and a husband to Ania Chilińska – his partner since 2015.